Posted by Unknown at 8:55 PM No comments:

I moved! My blog is now at a new site.

I'm still posting all those fun book reviews, so go check it out!!

So, I'm aware that many of you were probably under the impression that I had retired. (And I mean, like, the dead kind.)

However, I am here to put the rumors at rest: I'm alive and kickin'! I'm so sorry I haven't blogged in a long, long time....like not since Summer vacay. Whoops. That wasn't supposed to happen....

Yes, I know. I feel the same way. Long story short, I was getting tired of that old one, and I'm lying here sick with nothing to do, so I did that. Mind you, it is not permanent, and I'm considering getting a Squarespace site or something, but I don't exactly know. Indicisiveness is a legitimate issue.

Also, as far as excuses, 8th grade hit me like a semi truck and I am just now getting back into the groove of things. I'm sure a lot of you students (and parents and teachers) can relate!

So yes, this post is ALL over the place, but all I'm really trying to say is that I'm back, and I plan to stay back (I say that every time, but this time it's for real!!), and hopefully the blog will look different soon.

I'm happy to be back! What do you guys want to see from me this fall??

Posted by Unknown at 3:30 PM No comments:

I am currently sitting on the porch of my waterfront cabin, watching the sun set over Mt. Rainer. There's a slight breeze, the water is slapping up against the bulkhead, and I'm pretty darn content. I'm just sayin'.

Anywhoo, I'm on vacay, which is why I sort of why disappeared from the face of the (blogging) earth there for awhile. Sorry! However, in the mean time, I've been doing some summer reading and I'm super pumped to share some of it with you guys :). I was planning on doing another book for MMGM this week, but I just finished this one today and just felt like I needed to review it while the shock, the impact if you will, of how awesome it was was still fresh in my mind. Pretty sure that sentence was grammatically incorrect on several levels. Moving on.

This book touched my heart, taught me something new, and challenged me to look at how I as a teen can change the world. It dealt with cancer, how to live life to the fullest, and how it's never too late to do the right thing. I absolutely loved it, so let's get started with Hope Was Here. 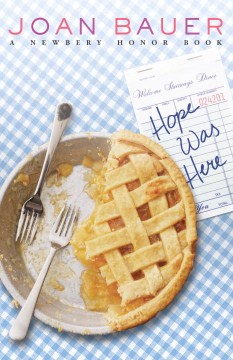 (I've never seen so many different covers for one book! This one is the newest (:)

Joan Bauer's beloved Newbery Honor book--now with a great new look for middle grade readers!
When Hope and her aunt move to small-town Wisconsin to take over the local diner, Hope's not sure what to expect. But what they find is that the owner, G.T., isn't quite ready to give up yet--in fact, he's decided to run for mayor against a corrupt candidate. And as Hope starts to make her place at the diner, she also finds herself caught up in G.T.'s campaign--particularly his visions for the future. After all, as G.T. points out, everyone can use a little hope to help get through the tough times . . . even Hope herself.
Filled with heart, charm, and good old-fashioned fun, this is Joan Bauer at her best.

I loved it, you guys. It was so good. There were love stories(they made my stomach flip-flop. no joke.), anger, courage, frustration, politics, outrage(you will get angry), joy, humor, hope, and food. Lots and lots of food. I seriously read the last page, looked up at my mom and was like, "Mom...that book was incredible. Maybe the best I've ever read."
So please read it, and check out Joan Bauer's other books, such as Rules of the Road, which I also read recently. If you would like to see me review Rules of The Road, leave a comment below!

I am currently reading The Green Ember by S.D. Smith. Check out the cover on the sidebar to your right--it is AMAZING!

COMMENT:
What are your summer reading goals and/or your favorite summer read??

This post was short but sweet, and that's what Hope Was Here is, too!

SUMMER IS HERE!!!! I still can't believe it. 7th grade is hard. I know it gets harder...but 7th grade....it's hard! And while I know you're probably thinking that 'summer is here' oooold news, I'm having a major letdown this year. Y'know what I mean? Like, I just need to sit here and read and be outside and with my family and friends. Holy moley I love summer. Anyway, that is part of the reason I haven't posted in a whiillle, and I kinda apologize for that. Kinda. However, there are other reasons, too, like....

A new look (for the blog of course :)!
Hopefully this will be up soon, I have some templates I'm really interested in, but I just gotta get my daddy to help me out :). For some reason, I really wanted this done before posting, but then I realized that was just silly. Sooooo here I am.

I've recently been reading a ton of fun stuff, but something I'm really into is the Mitford series, about a life in a small town in South Carolina. It's about the people and love and the little things in life, and it's so completely captivating. I believe it was originally intended for adults, but It's really clean and homey and makes you feel all warm and fuzzy. Unfortunately, I'm still on the first one because they're, ahem, kinda long. It's pictured down there :). Click HERE to read the summary.

Some other honorable mentions are My Life in Pink and Green, The Map Trap, and Blackbird Fly.

What are your summer reading goals?? How many books do you want to read?

I promise I will be back soon, but I am headed to summer camp tomorrow!!

So, I found these little animal friends that you can basically put on your blog for people to feed and stuff....

And so, you know me, I took a lot of animal friends.

So, now I have fish on my sidebar and fish, frogs, a dog and a hamster at the bottom of the page!

Yep. I went a little overboard. But it's okay!

So have fun feeding the animals! (Oh...and I included a hamster at the bottom of this post. Just cuz.)

Wanna get some of these animals friends for yoself?? Click HERE.

Also, I recently got Google+, so follow me on there!

This week, I'll be reviewing an amazing, action packed book by Ned Vizzini and Chris Columbus: House of Secrets. While you're all oohing and aahhing at that awesome cover (which promises an action-packed roller coaster complete with pirates [hello, top left corner]), allow me to just say that this has literally rocketed to the top of my favorite book list. Catapulted, ya'll. It was so good.

Why I read this book: I was over at my friend's house and she just shoved it into my hands and was like, "read this." And I'm just like, "okay."

Siblings Brendan, Eleanor, and Cordelia Walker once had everything they could ever want. But everything changed when Dr. Walker lost his job. Now the family must relocate to an old Victorian house, formerly the home of occult novelist Denver Kristoff—a house that simultaneously feels creepy and too good to be true. By the time the Walkers realize that one of their neighbors has sinister plans for them, they’re banished to a primeval forest way off the grid.

Bloodthirsty medieval warriors patrol the woods around them, supernatural pirates roam the neighboring seas, and a power-hungry queen rules the land. To survive, the siblings will have to be braver than they ever thought possible—and to fight against their darkest impulses. The key may lie in their own connection to the secret Kristoff legacy. But as they unravel that legacy, they’ll discover that it’s not just their family that’s in danger . . . it’s the entire world.

Six things to love about House of Secrets:

My thoughts: This was an amazing book. Action packed and creative, I feel like it's summed up in this review from J.K. Rowling: "A breakneck, jam-packed roller coaster of adventure about the power of books, House of Secrets comes complete with three resourceful sibling heroes, a seriously creepy villainess, and barrel loads of fantasy and fear." Spot on, J.K. Rowling. Spot on.

My rating: 8 1/2 out of 10 stars. I would like to say here that, due to some violence and intensity, I would recommend it to readers in the 5th grade and up.

Comment and tell me about your favorite book where ordinary kids become heroes!